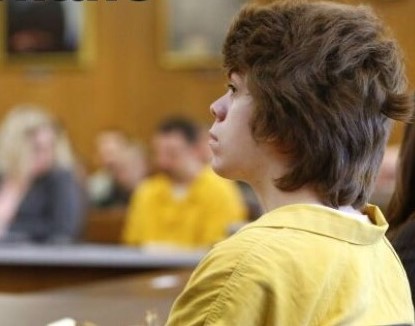 Three people were strangled or smothered to death in a Kansas drug home over a rape allegation and one of the suspects was forced to participate to save his life, according to court testimony.

The details about the case were revealed during a preliminary hearing that ended Wednesday with Shawnee County District Judge Nancy Parrish finding sufficient evidence for 19-year-old Shane Mays, 33-year-old Brian Flowers and 31-year-old Joseph Lowry to be bound over for trial on charges that include first-degree murder, The Topeka Capital-Journal reported . Parrish said that even though Mays was under duress, the state showed enough evidence that he aided and abetted the crimes.

Witness Richard Folsom testified that Mays was crying as he begged for his life during and after the March slayings of 19-year-old Matthew Leavitt, who was his best friend, and two others, 38-year-old Nicole Fisher and 20-year-old Luke Davis. To save himself, Mays was told he had to take part in the killings to “dirty his hands,” Folsom said.

Police Det. Jason Deutsch testified that the violence stemmed from an unproven rape allegation against Leavitt. Mays, Flowers and 31-year-old Kora Liles, who was only charged Wednesday, face murder counts in two of the deaths. Lowry and another person, 34-year-old Joseph Krahn, are charged in all three deaths.

Kathleen Ambrosio, Mays’ defense attorney, described her client as a victim, saying he wasn’t killed “by the grace of God.” But chief deputy district attorney Dan Dunbar argued that Mays was “willing to surrender other people’s lives to save his own.”

Attorneys for the other defendants either didn’t return calls or declined to comment on the allegations.

“I felt like I’d be next if I tried,” Folsom said.

Davis, who had been bound with zip ties, tried to escape, but Krahn and a second man caught him, Folsom said. Davis then was stabbed and strangled with an electric cord, Folsom testified. He said Davis had called out to him for help as he was being killed.

He said Mays and Leavitt were crying and praying to God when Krahn and Lowry told Mays he could save himself if he participated in the killings. Mays put a bag on Fisher’s head, then Krahn took over, suffocating her, Folsom said.

Folsom said Krahn beat Leavitt, used a plastic bag, then wrapped something around Leavitt’s neck to strangle him.

After the three victims were dead, a smiling Krahn spoke to Mays, Folsom said.

“Welcome to the elite,” Folsom quoted Krahn as saying. “You’re one of the few who gets to see me kill and live.”

Folsom, who said he was too fearful to report the killings, was charged with identity theft and interference with law enforcement.